After rectifying the cause of damp, it’s highly advised that you use an anti mould paint upon the treated area. They are formulated to provide the best form of protection against mould growth and staining whilst still allowing the moisture to escape. 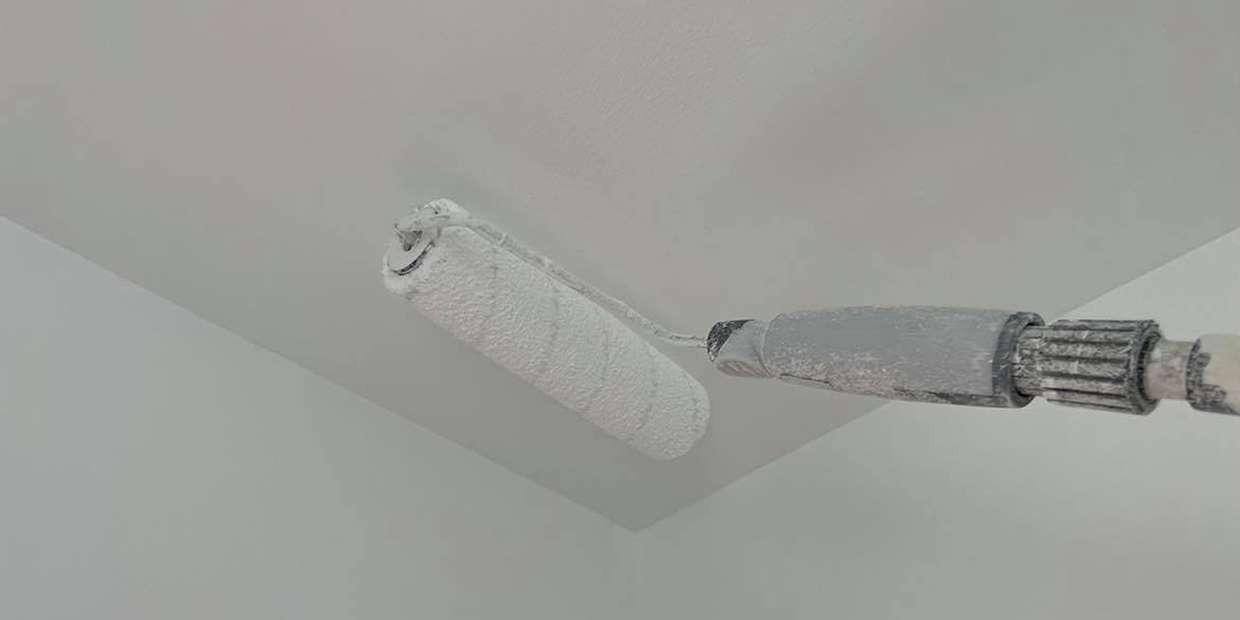 Anti mould paint is best used in areas that are prone to damp and mould build up such as behind large furniture, kitchens or bathrooms. Treating the walls and ceilings in these areas with a dedicated paint helps safeguard your home from the growth of mould and it’s highly recommended if you’ve had issues with damp in the past.

If you require a quick answer, the best anti mould paint is the Ronseal Emulsion, which is moisture resistant and provides up to 6 years of protection. However, if you need to permanently block damp stains, the brand’s One Coat Damp Seal is the best alternative that can be painted over with their emulsion once dried.

To rate the anti mould paints within this article, we based our recommendations upon plenty of research and multiple factors. The factors we considered included their coverage, ease of application, drying time, finish and value for money.

It’s important to note that before using any of the paints, you should fix the cause of the damp beforehand. No matter how good the anti mould paint is, severe damp issues may overcome the capabilities of the paint.

Below is a list of the best anti mould paints that prevent the growth of mould and allow moisture to escape. 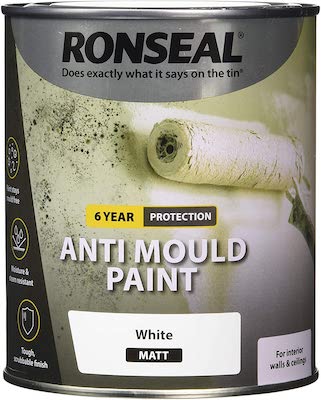 By far the most popular and highly rated anti mould paint is by the Ronseal brand. It’s a fast drying formula that’s suitable for walls or ceilings and provides up to 6 years of mould protection. The long lasting protection against mould is achieved by the inclusion of a powerful biocide in the formula.

Other features of the Ronseal Anti Mould include:

The Ronseal Anti Mould paint is moisture resistant and simply wipes clear of any dirt. It’s an excellent all-round option that dries fast and won’t disappoint. The only drawback is that it does require multiple coats for the best results.
Check it Out 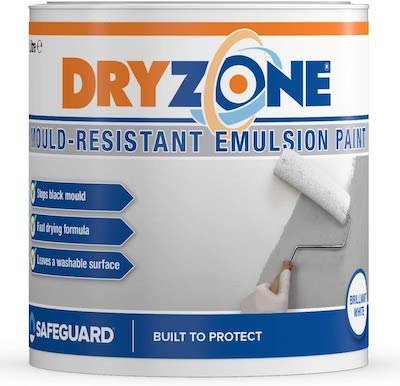 Dryzone are a brand that specialize in damp proofing and their emulsion anti mould paint is a great option. It’s a professional strength formula that’s guaranteed to protect against unsightly and unhygienic black mould.

The brand state that it’s able to prevent the occurrence of black mould for up to 5 years once applied correctly.

Other features of the Dryzone Anti Mould Paint include:

The Dryzone anti mould paint is an effective solution for walls or ceilings that suffer from the dreaded buildup of mould. Although it does come with a premium price tag, it’s a professional strength formula that doesn’t produce much odour unlike some of the alternatives.
Check it Out 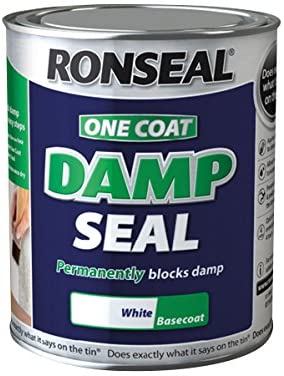 Another solution by Ronseal is their Damp Seal formula, which permanently blocks damp stains. It’s suitable for both walls or ceilings and it can even be applied straight onto damp walls.

Although you can apply this formula straight onto damp walls, you still need to do some minor preparation. This includes removing any wall paper and sanding away any flaking paint.

Other features of the Ronseal Damp Seal include:

It’s important to note that this formula blocks the damp completely. If the painted area is prone to excessive mould growth, you are able to paint over it with the brand’s anti mould paint that’s recommended above.
Check it Out 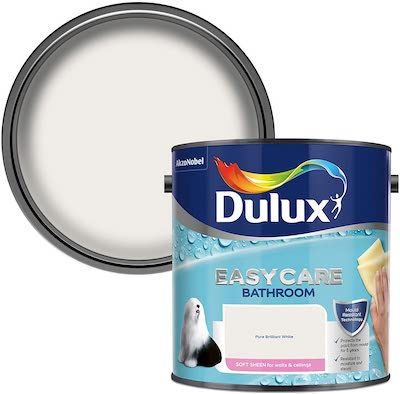 The Dulux brand are one of the most well-known in the UK and they produce the widest variety of paints. Their Easycare formula is an anti-mould paint that uses a “MouldTec” formulation and it protects against mould for up to 5 years.

Compared against their standard matt and silk emulsion paint, the brand state that this anti mould formula is up to 10 times tougher, which is very impressive.

Other features of the Dulux Easycare include:

Overall, the Dulux Easycare offers plenty of protection and we also rated it as the best bathroom paint on the market. If you’ve had issues with mould and damp within your bathroom, you can’t go wrong with the Easycare formula.
Check it Out 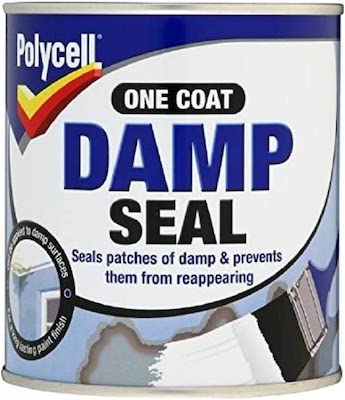 The One Coat Damp Seal by Polycell is another popular paint that’s designed to seal patches of damp and prevent them reappearing. It’s available in 500 ml, 1 or 2.5 litre tins but also as an aerosol for hard to reach areas.

Other features of the Polycell Damp Seal include:

Although the paint is rather expensive per litre, it does only require a single coat according to the brand and its also suitable for most indoors surfaces such as plaster, cement or stone. Overall, the Damp Seal is a great option to consider with an easy brush on application.
Check it Out 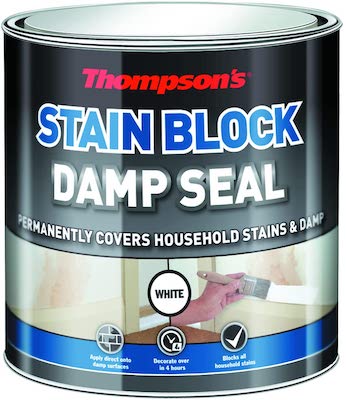 By far the cheapest paint used to treat and prevent mould growth is the Thompsons Damp Seal. It’s designed to be painted upon damp surfaces to protect against penetrative damp but it also allows moisture to escape through the paint.

Other features of the Thompsons Damp Seal include:

Overall, the anti-mould paint by Thompsons produces a high performance yet breathable seal that permanently stops the appearance of damp. Although the brand state that one coat can provide full coverage, it’s advised to add another coat once the first has dried.
Check it Out

How We Rated The Anti Mould Paints

After hours of research and considering a number of factors, we came up with the above list of recommendations. The factors that we considered included the paint’s coverage, ease of application, drying time, finish and value for money.

After tackling the cause of damp, investing into a quality anti-mould paint is highly recommended. Compared to regular emulsion paints, they provide greater protection and still allow moisture to escape that’s trapped behind the paint. Whether you need to seal damp patches upon walls and ceilings or simply want to safeguard the room against mould, all of the recommendations above will do exactly that.