Black mould can be troublesome and spread fast but by using a mould remover in the form of a spray or gel, you can easily eliminate it. Within this article, we list some of the best formulas that are highly effective and suitable for use upon a range of surfaces. 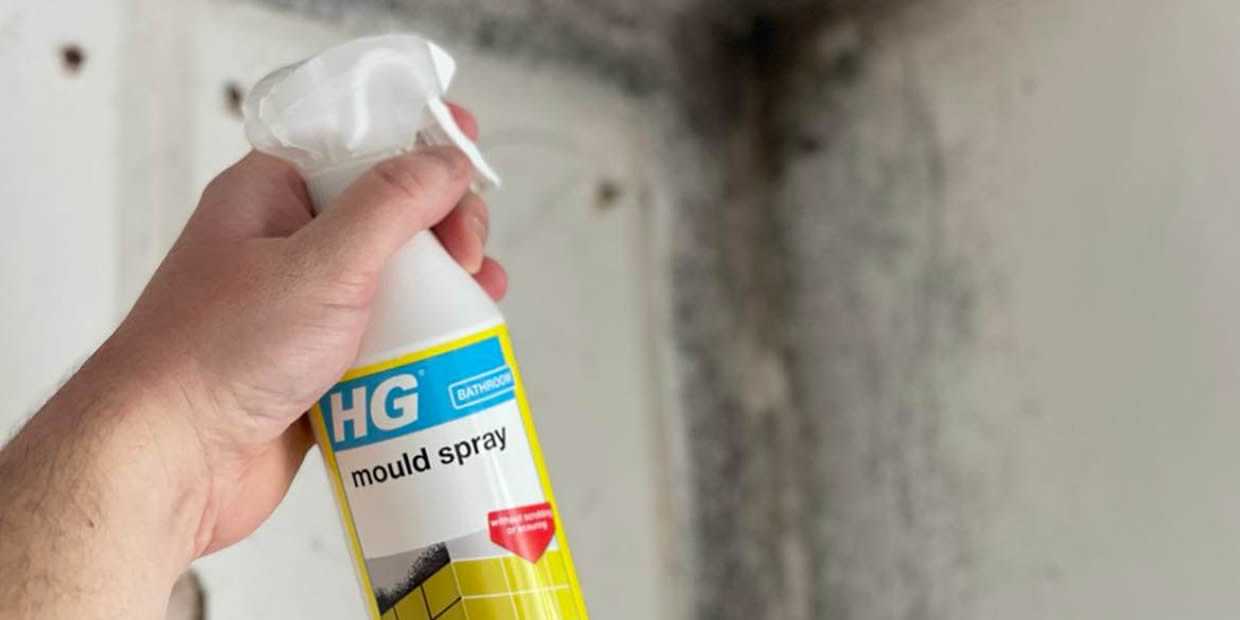 If you require a quick answer, the best mould remover is the HG Spray, which is very easy to use and highly effective upon tiles, sealant, plaster walls and many other surfaces. However, if you want a complete kit that’s able to eliminate and prevent mould reoccurring, the Dryzone Kit is a great option to consider.

To rate the mould removers within this article, we based our recommendations upon our experience and testing of multiple formulas upon walls as well as bathroom tiles and sealant. We also based our recommendations upon hours of research and a number of factors. Some of the factors that we took into consideration included the ease of use, formulation, compatible surfaces, effectiveness, ability to prevent the mould reoccurring and value for money.

If it’s your first time tackling black mould, we’ve put together an in-depth tutorial on how to get rid of it. Within this guide, you can follow each of the steps using any of our recommendations within this article.

Below is a list of the best mould removers that are easy to use and effective at removing all types of mould.

By far the most popular and highly rated mould remover is the HG Mould Spray and we’ve had plenty of experience with it. According to the brand, it’s designed to remove all brown and black stains that are caused by mould, fungus and algae.

This particular formula has been around for many years but it has been recently improved to be even more effective. If you’ve used it previously, you may also notice that it has a a new label too but its still the same highly rated mould spray.

Other features of the HG Mould Spray include:

Overall, the HG Mould Spray is by far the best mould remover for the money and its popularity speaks for itself. However, to avoid disappointment, we would recommend purchasing multiple bottles because you may use it up quickly.
Check it Out 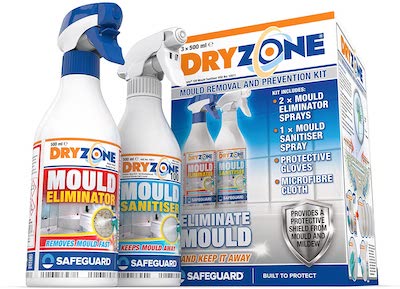 If you want to remove mould and also prevent it from reoccurring, the Dryzone Remover and Prevention Kit is a great option to consider. It isn’t the cheapest but it includes two eliminator sprays, one sanitiser spray, protective gloves and even a microfiber cloth. It’s a complete kit that’s fast acting and provides a protective shield against mould and mildew.

Other features of the Dryzone Remover and Prevention Kit include:

To conclude, if you require a two part system to treat areas of mould in your home, you can’t go wrong with this Dryzone kit. The only drawback is the price tag but when you consider all the contents, it actually offers great value.
Check it Out

An alternative mould remover that’s not a spray formula is the Skylarlkife gel. It’s a popular formula that’s very versatile because it can be used upon a range of surfaces but it woks best when removing mould upon bathroom sealant.

Other features of the Skylarlkife Mould & Mildew Gel include:

If you don’t want to use a spray but instead have the ability to precisely target certain areas of mould, the Skylarlkife gel is the perfect solution. Although it only comes in a 150g tube, it’s a concentrated formula that’ll treat large areas.
Check it Out

The Furniture Clinic brand are well-known for their leather sofa cleaners but they also produce a range of other cleaning products such as this mould spray. It’s designed to be used upon all types of leather, fabric and wood and according to the brand, it can also help to prevent mould reoccurring too.

Other features of the Furniture Clinic Spray include:

To conclude, if you need to remove mould from fabric, leather or wood, this Furniture Clinic formula is a great option to consider. It’s also developed by a brand that specialise in furniture cleaning products for complete peace of mind.
Check it Out 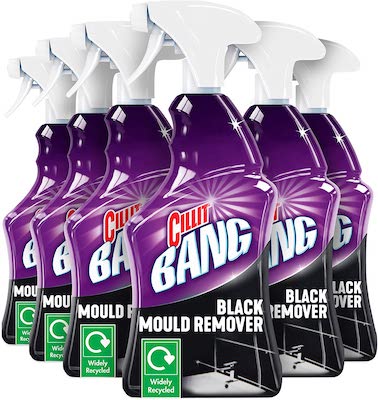 Cillit Bang are a brand that need no introduction because they are a leading brand within the cleaning industry in the UK. Their Black Mould Remover is a popular formula and according to the brand, it’s able to completely remove black mould without scrubbing. All that’s needed is for you to spray the formula onto the mould and leave it to work for 15 minutes.

Other features of the Cillit Bang Spray include:

Overall, the Cillit Bang Black Mould Remover is an excellent all-round option that ticks all the boxes. It’s also developed by a highly reputable brand that promises instant results for complete peace of mind.
Check it Out 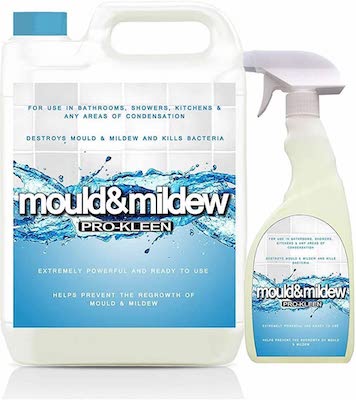 Pro-Kleen are another brand that produce a range of cleaning products and one of their highly rated options they have to offer is this mould and mildew remover. It comes in a large 5 litre container (as well as a 750 ml spray bottle), which enables you to tackle large areas and keep it stored for any future use.

Other features of the Pro-Kleen Mould & Mildew Spray include:

To conclude, the Pro-Kleen mould remover is highly effective and offers outstanding value for the money. When you consider the cost per 500ml, the Pro-Kleen formula can’t be beaten on price and it certainly won’t disappoint.
Check it Out

How We Rated The Mould Removers

As we own a number of properties (rentals and Airbnb’s), we often have to tackle black mould. From our experience, it mostly occurs in the bathroom and areas where there is a lack of ventilation. However, regardless to how it was caused, black mould is relatively easy to remove when using an effective mould remover.

As you can see in the photo, we recently tackled mould upon some bathroom tiles and sealant using the HG Mould Spray. The formula got to work straightaway and for some areas, it didn’t even require any agitation either. It’s important to note that although this formula states that its for bathroom use, it also works great upon walls, which we put to the test in our in-depth tutorial mentioned above.

As well as our experience and testing of multiple mould removers, we also based our recommendations upon hours of research and a number of factors. Some of the factors that we took into consideration included the ease of use, formulation, compatible surfaces, effectiveness, ability to prevent the mould reoccurring and value. 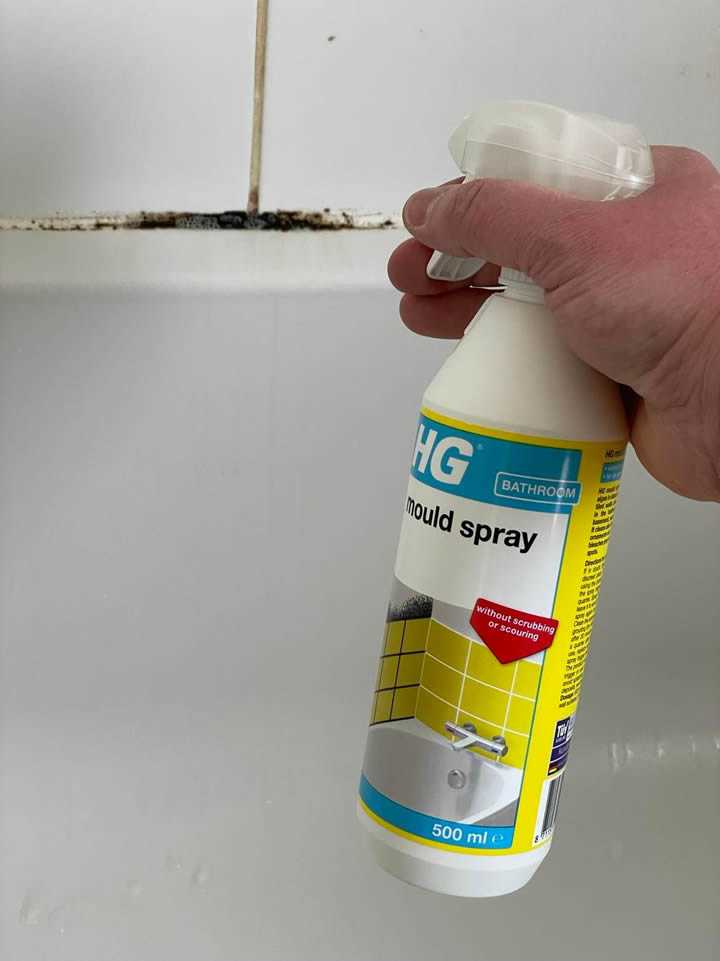 Below is a video that we posted onto our Instagram page and it shows us testing the HG Mould Spray. As you can see from the before and after photos, it was very effective and this was one of the reasons why we rated it as the best.

Not only is mould unsightly to look out, it can also affect your health if its not treated. Therefore, we strongly recommend treating it with one of the mould removers listed above as soon as you can.

All of our recommendations listed above are suitable for all budgets and they are very easy to use. For peace of mind, after removing the mould, we would also recommend using an anti-mould paint upon the walls or a sanitiser upon any bathroom tiles or sealants to avoid it reoccurring. However, you should also look at why the black mould was there in the first place to stop it reoccurring after it has been treated.