Home » Home & Garden » Cleaning » How To Get Rid Of Mould

How To Get Rid Of Mould

Black mould upon your walls is not only unsightly to look at but it also posses as a health risk too. Within this article, we walk you through the steps required to get rid of mould with videos of the process as well as satisfying before and after photos. 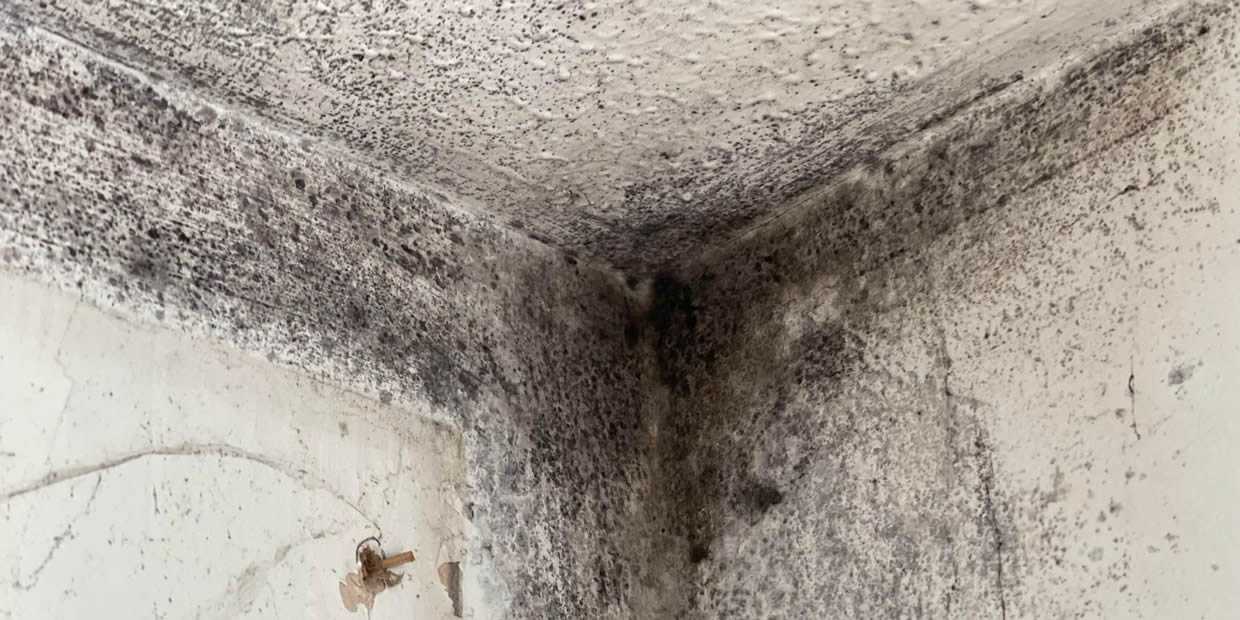 Black mould can be a common problem within your home and it isn’t something that should be ignored. The main reason to get rid of mould is primarily due to the potential health risks but it can also spread if left untreated.

Luckily getting rid of mould on walls, in your bathroom or anywhere else in your home is relatively easy to do. Below we walk you through the steps involved whilst using a dedicated mould remover.

Although it can be tempting to use a homemade solution or other cleaning products, we highly advise that you use a dedicated formula for the best results. In our tutorial, we used the HG Mould Spray, which we rated as the best mould remover. As you’ll see in the results at the end of this tutorial, it’s very effective and we highly recommend it.

Depending upon where the mould is may determine which formula would be the most effective at getting rid of mould. For example, some formulas work best at removing mould upon bathroom surfaces such as silicone sealant whereas others work better when used on walls.

Regardless of the mould remover you use, most are easy to apply and only require 15 to 30 minutes to get to work. 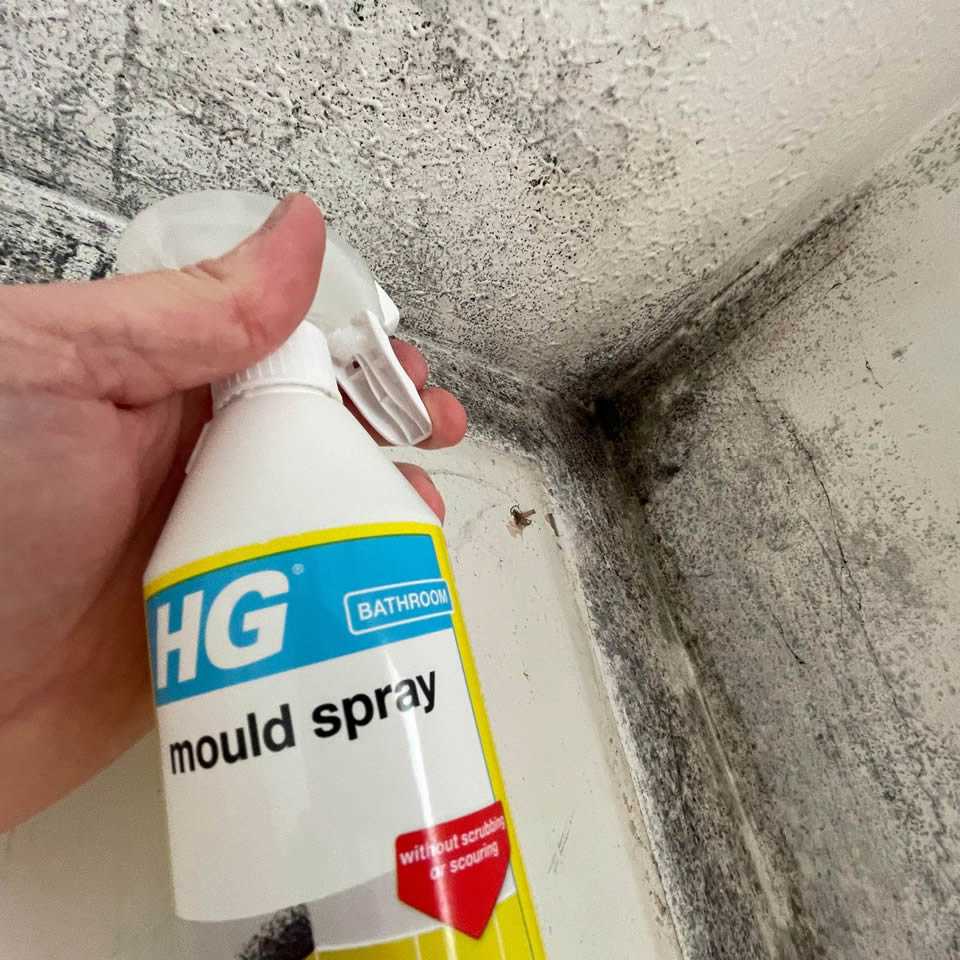 How To Get Rid Of Mould On Walls

Before you begin to spray the mould remover, it’s important that you prepare the room beforehand. We advise that you remove any of your personal belongings that are easy to move out of the room such as clothing, fabrics and so on. You’ll also want to open all the windows and then shut the door so the spray doesn’t leave the room.

Now that you have isolated the room, you can put your gloves and protective mask on and begin to spray the formula over the mould. In order to catch the excess dripping down the walls, you may want to place some paper towels at the bottom of the wall to avoid it falling onto the floor.

As you can see from the video that we posted onto our Instagram page below, we liberally sprayed the formula onto the mould from a distance of approximately 10 cm away. We also sprayed the entire area without pausing so that we didn’t have to keep going in and out of the room.

4. Give The Formula Time To Activate

Once you have sprayed the formula (and agitated if required), it’s a good time to leave the room and get some fresh air. In terms of how long it takes the formula to activate, most mould removers take between 15 to 30 minutes to get to work. However, it’ll state the exact time it takes to work from start to finish on the bottle. As shown in our results below, you may notice that the mould turns yellow as the minutes pass by.

Once you have allowed the formula to get to work, you can proceed to wipe it clear with a damp cloth. After each wipe, it’s advised that you rinse the cloth clear with water to avoid spreading the residue across the wall.

Before And After Results

The removal of mould is very satisfying to watch because the formula breaks it down over the course of 15 to 30 minutes. The photo below is the starting point before we began to spray the mould remover. As you can see, the top right corner has suffered the most but there is a lot of mould to remove. 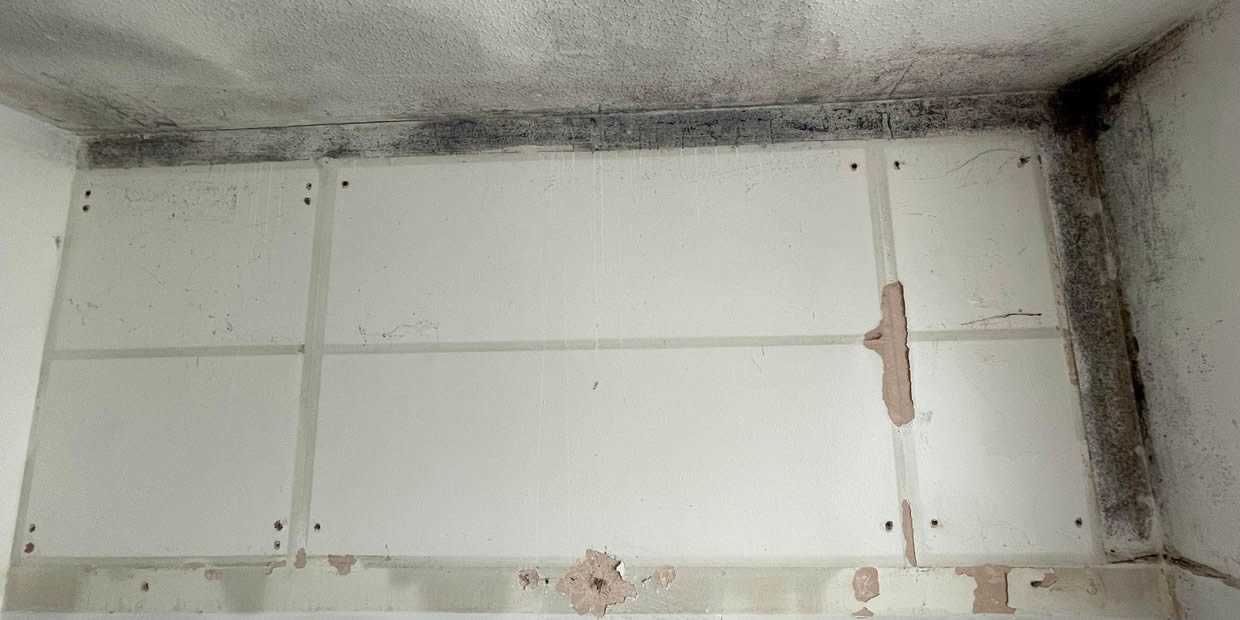 The next photo shows the state of the mould after it had been sprayed (the photo was taken around 30 seconds after). 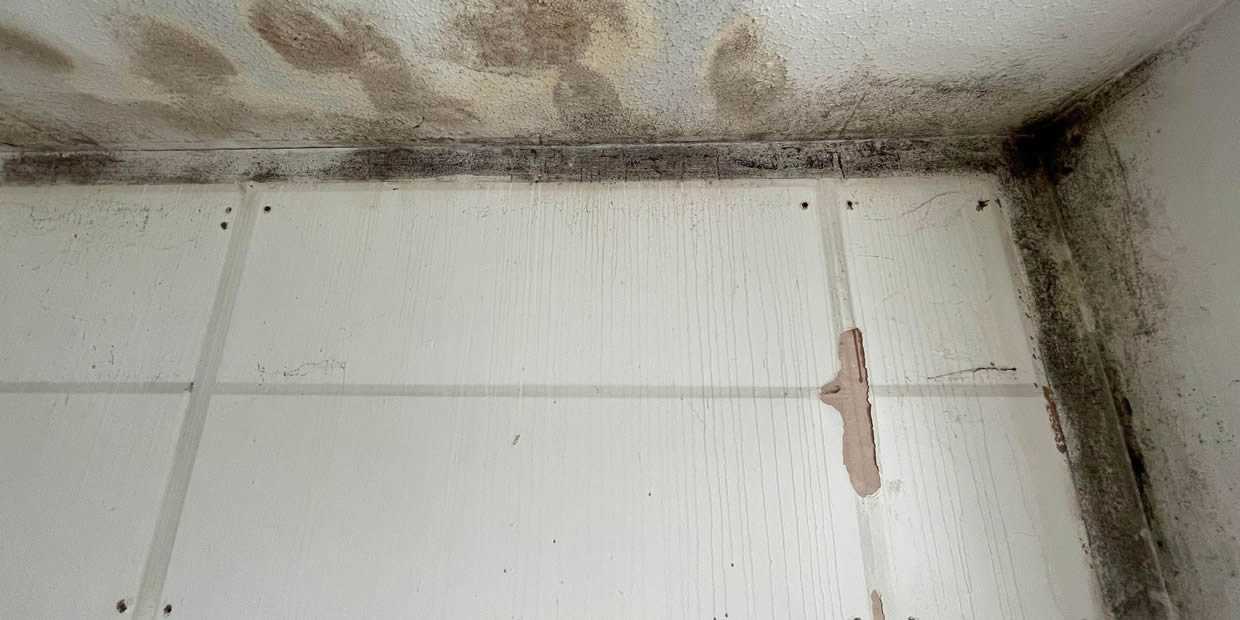 After approximately 5 minutes, the mould started to turn yellow as the formula was breaking it down. 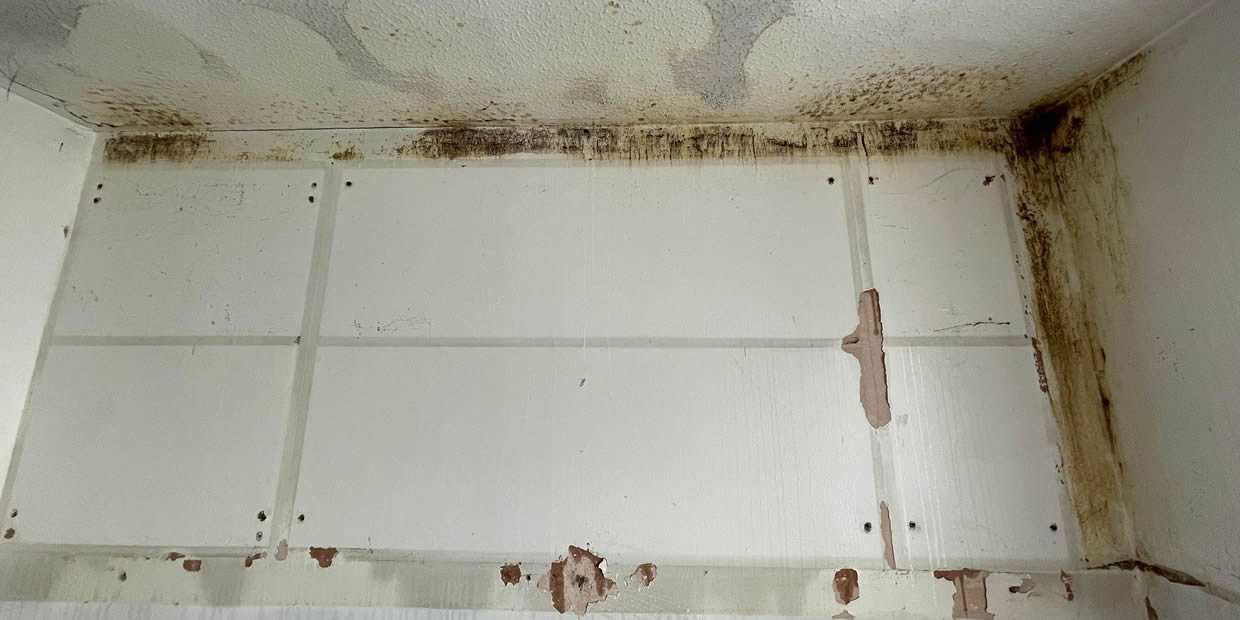 After 15 minutes, the majority of the mould had been removed from the wall. However, due to the fact that there was so much mould, we sprayed it again and waited another 15 minutes. 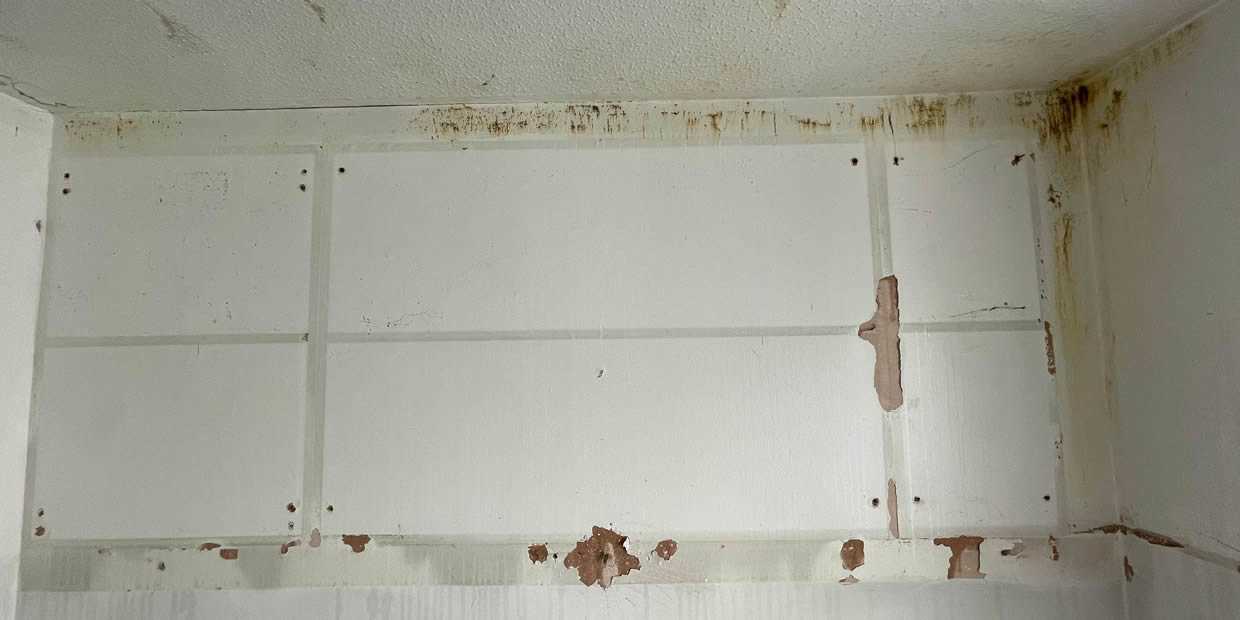 The below photo is the final result of using a mould spray and it has certainly made a huge difference. All that’s needed to make the wall more presentable is some wall filler in the holes (there was previously cupboards attached to the wall) and white emulsion paint for the finishing touch. 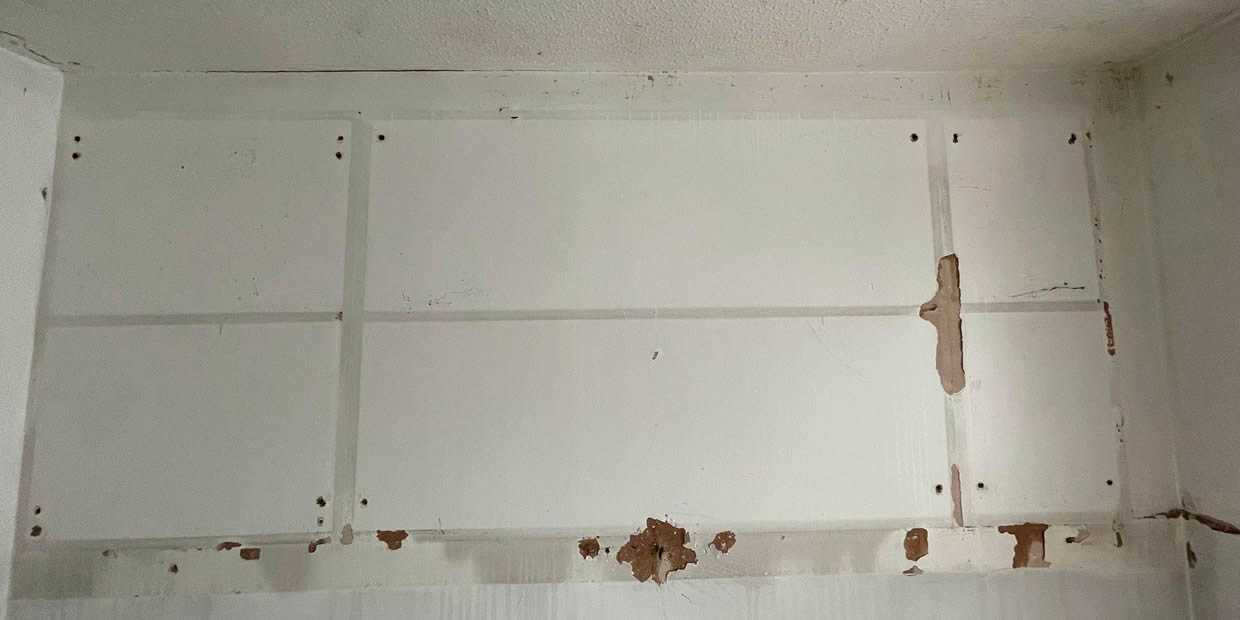 Black mould upon silicone sealant is another common area for it to grow and it can be difficult to remove. However, many of the mould sprays are very versatile and they often work on a range of surfaces such as walls and sealant. Therefore, you may be able to simply spray the mould remover onto the sealant and allow the formula time to get to work.

If you don’t have a mould remover to hand, you may be able to use a mixture of white vinegar, bicarbonate of soda and water to get rid of the mould.

However, depending upon the condition of the sealant may determine whether or not it needs replacing altogether. As shown in the photo below, the sealant wasn’t in a great condition and we ended up resealing it with a dedicated bathroom sealant. The sealant we used was designed to prevent mould with added fungicides within the formula.

The saying “prevention is better than the cure” is very relatable with the growth of mould. Whether mould is present in your bathroom, bedroom, kitchen or anywhere else in your home, there are many methods to prevent it reoccurring.

The first method is to ensure the room has plenty of ventilation and the air in your home flows freely. This can include opening the window whilst you are showering, drying clothes or anything else that increases the humidity in the room. If you are struggling to tackle humidity in your bathroom, we strongly recommend installing a powerful extractor fan.

The use of a dehumidifier is also highly recommended if mould keeps reoccurring. We personally use a dehumidifier in our bedroom because it also helps to reduce dust build-up too. If its your first time using a dehumidifier, you may be shocked to see how much water it collects and it’s certainly a worthwhile investment.

Hopefully our guide on how to get rid of mould helps you to tackle areas of mould within your own home. However, if you need further advice, feel free to get in touch and we’ll try to provide further assistance where possible. Whether you use a dedicated mould spray or natural products, getting rid of mould is relatively easy to do.